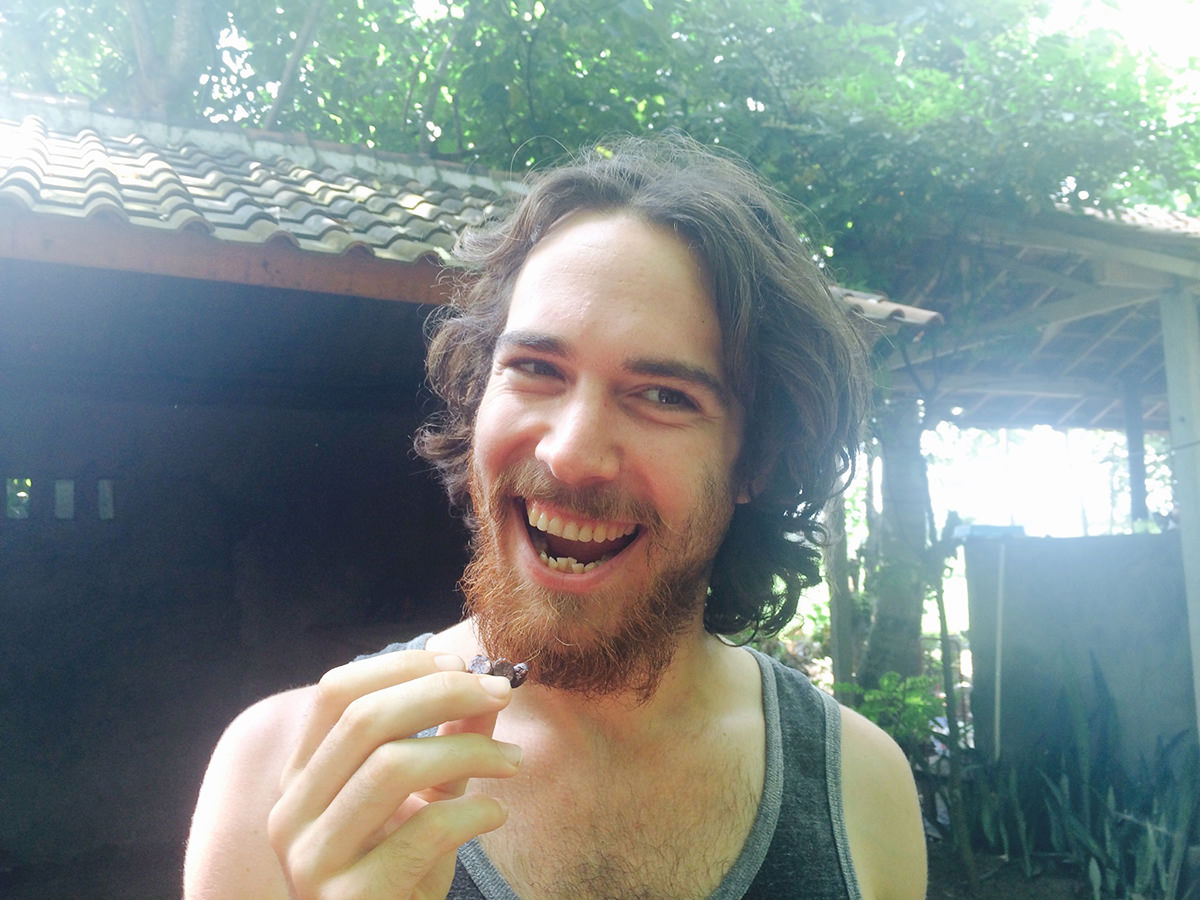 When love, curiosity, and a deep desire to integrate all personality shadows meet, miracles happen. Relaxation no longer means indulging on the lounge chair of life, sipping margaritas of ambivalence, letting life become dull and the body heavy. To relax is to let the tension have its way to the nth degree. To feel it fully fill you. Not to understand it, but to allow it to embody you and, at its full saturation point, dissolve. Autolysis.

This is what happening … a full digestion of self.

I have often dreamed of having a maid and a personal chef and a personal trainer. I’ve imagined enviously the life of a temple priestess, who exists only to be in her body and her calling, while all areas of her domestic life are taken care of. I’ve shamed myself for these desires and delusions of grandeur. And here I am, living in a loving Kula with all of this. At purpose in every moment. Supported so graciously by a staff of beautiful Balinese people. Every day my bed is made, my floor is mopped. Meals are prepared, errands are run.

My life is a continuous spiritual practice that honors the deep union I have sought between modern and classical Tantra. Within a day’s time, so many spontaneous miracles have space to birth. So much intimacy is possible. Authenticity leads the way. Oxytocin helps to smooth the treacherous path into absolute unfoldment.

Yesterday, I spoke with a beautiful Balinese man for hours in his compound, surrounded by his art and an enormous statue of Narayana/Vishnu. He was 40-years-old to my surprise, looking like a 30-something hipster with cool jeans, earrings, and a ponytail. He was a devout Vishnava, worshipper of Vishnu. A lover, Yuri, and I spent hours with him, discussing the deep intricacies of prayer, culture, Hinduism, Balinese ceremony, Tantra, sex, polyamory … in other words, truth. Or juru, as he would say so intensely when he began to reveal something profoundly personal or to encourage and embrace us in our truths.

After many hours, we sat on the floor, eating and drinking together—at one point, meeting his wife and daughter. As the sky darkened, he insisted on introducing us to his two favorite yoga and meditation teachers. It was important to him to share with us because he saw these men has humble, powerful, full of integrity.

The edgy truths that we dared dive into during our conversation absolutely blew my mind. His total curiosity and acceptance of who we are felt like world peace blossoming in my heart. I will never forget this day.

And how did this day begin? Yuri asked me if I wanted to go on an adventure and outing with no particular destination but a desire to be with nature, with herbs, with Bali. To learn.

After a stop at the local herb store, we decided we wanted to either visit a farm or one of the progressive schools in Ubud. Finding your way to things in Bali is always an interesting combination of Balinese people asking, “Fo you know where x is?” Landmarks, streets with mostly unfamiliar names. Then the calling of friends who can shed some more light on the location. Then sometimes a, “Ok you go to location A and then call my friend, he tell you from there.” And then surprisingly, and not so surprisingly, Google Maps helps out as well. It’s this patchwork of technology that gets you thinking you know where you are going. And that is enough. It is the magic of Bali that leads you to where you are meant to go that day.

On our way to the famous Green School, we found a different school Pelangi, meaning rainbow. A man, Apa, who was quite comedic, greeted us at the front desk. With a huge smile, mischievous eyes, and a true talent for sarcasm, he started to play with us, and then constantly checked in as to whether his playfulness was okay and being received well. We encouraged him. We toured the school, meeting the director, inspecting the gardens. Yuri, touching every plant and purposefully taking off his sandals and stepping in mud puddles.

I told Apa under my breath, “He’s a hippie, you know what that is?”

“Ah, yes he said…” and then he offered Yuri a leaf to eat.

In our brief and warm conversation with the director, whose energy body so reminded me of my past self, an overworked teacher/administrator at 2 p.m. … one more hour in the school day … holding it together for the marathon closing sprint toward the finish line. When I told her my history in helping develop a high school, she asked me to send her my CV, as they are considering extending into high school years. Currently they serve ages one and a half through 12. I was so excited by the idea of passing that knowledge forward. Building a school from scratch is such a daunting task. If I could give even an ounce of relief or support in that process, it would delight me to no end.

As our tour came to a close, our guide, self-deprecating and hilarious, started explaining that it’s okay to touch one another in Bali, as he playfully shoved his female office counterpart. They were having so much fun. He went on to explain that is okay for men to touch each other as he smacked a male co-worker on the back. “No one thinks or worries about if this means you are a homosexual, we just love one another.” My heart was bursting to see and hear and grok this.

With another round of patchworked navigational poetry, leading  to sort of  where we wanted to go next, we were on our way. I asked Yuri if he wanted to use Google Maps for this one and he said no, I’m okay with getting lost. I said, me too.

As we departed on the country road behind the school, children in front of every store and house yelled out to greet us. On this street, our white skin was a bit more novel than on the central tourist thoroughfares.

We made it out to a more major road, going about 20mph, when a young man started driving parallel to us, introducing himself in formal English through a generous smile. His name was Lengu. He asked the standard introductory questions with precision and eagerness. He gave us more elaborate directions to where we were headed and then we parted. Yuri and I were amazed that we just had a full on conversation, while riding on a motorbike. How does that even happen?

We parted ways, only about five minutes later to see Lengu, pull up alongside us again. He wanted to tell us that he lived very close to where we lived, and he was a butler and loved speaking English. At this point we pulled over to speak and landed at a nursery. We explored some plants together and then decided to go to a Luwak coffee farm together. He wished to show us the way and practice English.

There, I finally saw a real live Luwak cat (aka civet, aka cat-like creature of the mongoose family, aka holy shit! Its scientific name is Paradoxous hermaphroditus). If you know how much I adore playing with paradox, how central paradox is to Tantric philosophy, or how obsessed I am with the desire for not only myself to be a hermaphrodite but for everyone in the universe to be one … then you can see me, jaw fully agape and eyes wide open as I learned this.

Somewhere in that swirl of disbelief, we sampled teas, saw a porcupine and a huge iguana, and a very sweet fruit bat hanging upside down in a perfect Dracula pose, as its owner implored us to hold her and take a picture with her.

And then that part of the adventure came to a close, we parted ways with Lengu and sought out for the Green School once again.

We arrived at the intersection where we were pretty sure we were supposed to turn, overshot it a bit, and pulled into a painting store with a mammoth blue-God statue in front. We were undecided if it was Krishna or Vishnu or some other and shrugged our shoulders saying they are one in the same. I was hesitant to even get off the bike, because I was enjoying being lost and was pretty sure I knew where we were supposed to turn. But Yuri leapt off and entered the store.

A huge square room with vaulted ceilings and paintings covering every inch of space, except for the cool marble floor. We asked the owner, Rindy, for directions to the Green School. He said he would call a friend to ask. After that, he began drawing me a map and we looked over to see Yuri splayed out on the cool floor with his eyes closed. Rindy said, “No problem man, you can rest, you can sleep,” and then offered us some oxygen water, of which he was a proud fanatic. I could see what a relief this was to Yuri, and so I relaxed into looking at paintings with Rindy. I was really called to a few of the paintings, thinking of my aunt and all of the art she exposed me to in my life. He then showed me his art, first a very modern pop art piece and then intricate and devotional paintings to Goddess Gayatri and Lord Ganesh. Then “his first style” which was more color-blocking, textured, caveman like patterns. He explained a real artist can do any style.

He spoke of how handsome Yuri was and how beautiful I was. How he much preferred curvy women, like his amazing wife. He told us how lucky we were. How true love and inner beauty comes from the heart. He was a little confused when he asked if Yuri was my boyfriend and I said “sometimes.” It seemed a bit much within the first five minutes of meeting a new Balinese man to explain, “Well actually I’m polyamorous, and I relate deeply with love, to several people, some of which I am currently living with, and we don’t really use the word “boyfriend” in the same way you do.” It was hours later, as we sat on the floor, eating food together, diving deep into Hinduism, Tantra, sex, and relationship, where he made it safe for me to speak my truth and accepted it with total grace, then he smirked, “Oh..I get it … you said earlier … sometimes he is your boyfriend … I thought that was funny when you said it, but now I understand.”

My heart is cracked open. Flooded with love. We never made it to the Green School, but we certainly made our way. 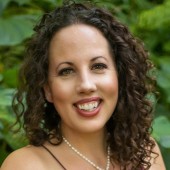 All stories by: Lalita Diaz

Your Time to Evolve Is Now

Discover how to free yourself of fears and step into your authentic self. Genuine, gentle support will be delivered straight to your inbox when you sign up today. I am the co-founder of Sex Positive Nashville (SPN) — an organization that promotes intellectual conversation around sex and sexuality. SPN provides a safe space for all to reclaim sexuality as ethical, healthy and fun and to network with others who have a professional or personal desire to be better informed. Want to engage with likeminded people who share your love for all things sex geekery?

Want to stay in touch with Lalita?

You'll get occasional updates on events, products and discounts.
Just enter your email below!
We deeply respect your privacy; this is a spam-free zone.
You can unsubscribe at any time.

Powered by Convert Plus